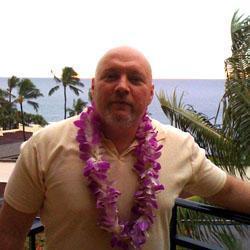 "Hi, I am Russell L. Thomas (a.k.a. TheAllusionist), founder of 3DAllusions LLC. I originally started 3dallusions.com as an online portfolio and to learn how to set up a website and an online forum to support the CG and Architectural/Design community.  My architectural thesis was based on conservative post-modernism and the genre's that influenced it such as "Neoclassicism", "Picturesque" and "Radical Neoclassicism", all of which is "alluding" to history and nature. The whole concept of alluding to something real interested me more than the falsehood of an illusion. This led me to experiment with "allusionry" as it were and later led to the site name "3DAllusions" and the nickname "TheAllusionist".

Eventually the forum took off and then the online portfolio became the much needed main site for the community that was growing. At this point I had to start a completely different site for an online portfolio for our studio, this site, so things have come full circle. Professionally, I am a graduate of Washington State University's School of Architecture and have been doing architecture since 1992. Recently I decided to focus on CG, so I quit my job and have started up a studio working with a few artist I greatly respect.

I have varied interest and have been using CAD from day one. I started doing architectural visualization via computer renderings for the most part and some forms of traditional illustration. This led to an interest in all things CG and I have dabbled in character creation as well as architectural visualization. I have also done architectural and character animation in an effort to round out my experience. I was a frustrated artist and chose architecture since it combined art and science for which I have aptitudes for. Right out of college I did a graphic novel in rough draft form and DC comics showed interest in the project, but by this time I was staying busy doing architectural work and did not have time to pursue the relationship.

Early on I got into 3D modeling, I used DataCAD and Visual Reality, two programs you probably have not heard of. I wrote some articles for magazines and news letters focusing on the benefits of visualization. This led me to do consulting work and setting up CAD software for firms. I started my own design studio where I did High-End luxury homes and light commercial design. At a certain point I wanted to do more than residential work so I contracted out to architectural firms doing work on educational, medical and civic projects. I gained a reputation as a hired gun of sorts and helped implement CAD programs like Architectural Desktop and CAD standards in addition to doing Construction Documentation for various firms. I decided to move to the larger metropolitan area of Seattle, Washington in order to get exposure to larger projects. At this time I started working as a full time employee at firms as project manager, designer and even CAD manager as I moved around getting experience in all types of architectural projects. I had the fortune to work at some top design orientated firms in the Pacific Northwest. Eventually I decided to use my creative talents full time and devote my energies to my company 3DAllusions LLC and subsidiaries such as 3DAllusions Studio (3DAS), 3DAllusions (3DA) and MrMaterials (MrM)."

Stay Up to Date With News, Inspirations and Events